In February 2017 we talked about the Sartiglia di Oristano, one of the most important Sardinian events. For the carnival 2018 instead we go to Orani, a small town in the Sardinian inland.
We reach this destination on Saturday 17 February, when the event “Mascheras Tradizionales” is held; here there is a parade of traditional costumes from the villages of central Sardinia. We stand to wait for the parade in the initial part of the path, near the Church of Santa Maria. Once the parade is over in this first point, we plan to move through the tortuous streets of the village to the area of arrival (Italia square); in this way we will be able to see the passage of the parade in a second place.

The beginning of the parade is scheduled for four o’clock, but the wait goes on for a few minutes… we hear a hum in the crowd and then we see the first masks. It is only a quick anticipation of the procession. We see the Maimones of Oniferi, men wearing dark traditional costumes of shepherds and of their wives; even their faces are dark, soiled with soot. Together this group there is a donkey ridden by a puppet representing the figure of the farmer; it is a symbol of good omen.
After a few minutes the Maimones come back and immediately after the long procession starts. 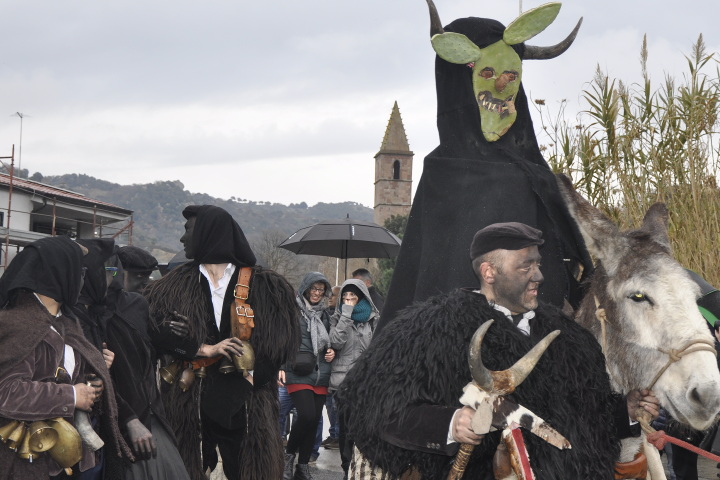 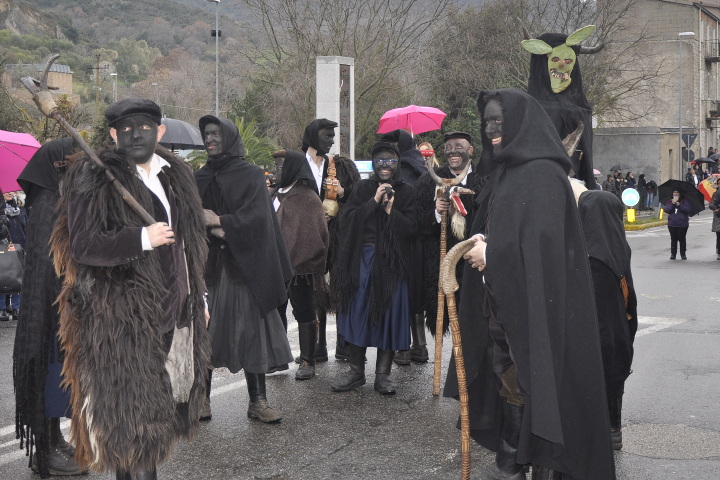 A group of men dressed in heavy black overcoats, with cork masks and a wooden trident, appears first: Su Bundhu of Orani! The protagonists engage the public by staging particular behaviors, which reflect the characteristics and traditions of the various masks.
Su Bundhu’s mask is characterized by a large mustache, a pronounced nose and bovine horns; these figures, while advancing, stage the sowing ritual, striking the ground in front of them and throwing seeds of wheat. They continue to whisper and move nervously, instilling fear in the public all around. As the Bundhus advance we hear a rhythmic music that gets closer and closer. In the street arrive Su Tumbarinos (the drums) of Gavoi. The Sonadores (musicians) they walk wearing velvet costumes and caps, intent on playing; many of them have drums, but we also see other instruments, such as the pipe, the accordion and the triangle. The procession continues with the masks of Ula Tirso. First there are two Maskinganna, people covered with goat’s skin, with a headgear consisting of the head of the animal. These two figures, intent on chasing each other and mimicking some clashes, represent the devil. Shortly thereafter S’Urtzu, a man wearing the skin of a boar, also arrives.
While walking, S’Urtzu is surrounded and beaten by Omadores (dressed as tamers) and Bardianos (dressed as shepherds). 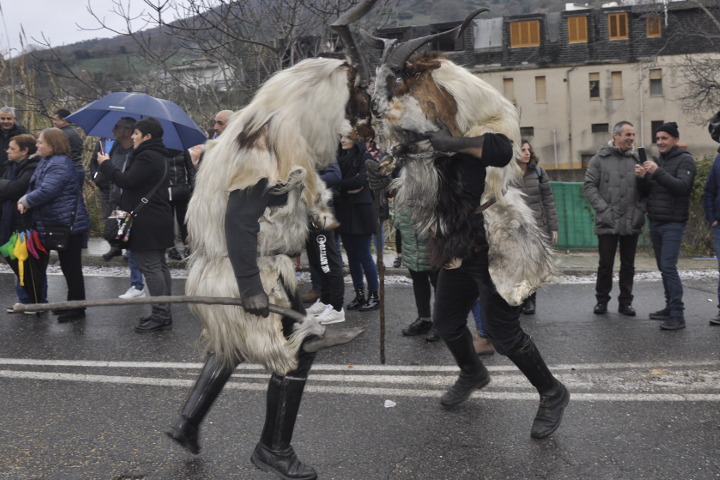 Urthos and Buttudos of Fonni

Then the Maimones pass (we have already described them at the beginning).
The Urthos and the Buttudos of Fonni follow them. The Urthos represent the animal or the god of the dead, they wear a bell and are dressed in sheepskin; they are kept in the chain by Mario Sos Buttudos (guardians dressed in black) and they continually try to free themselves, to chase people of the public or to climb on the walls. 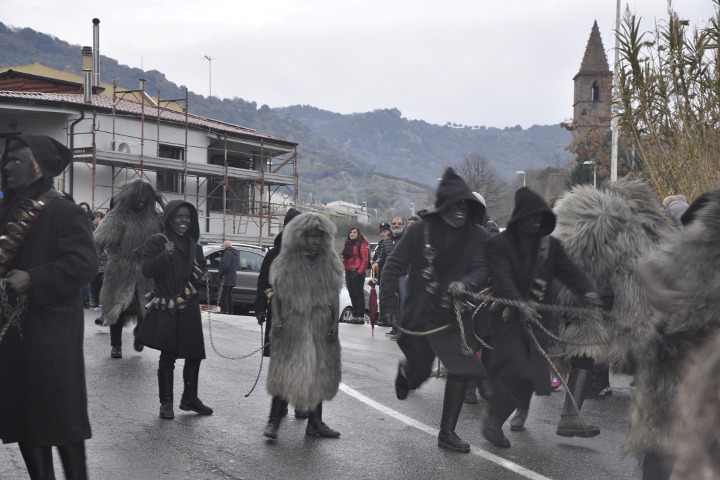 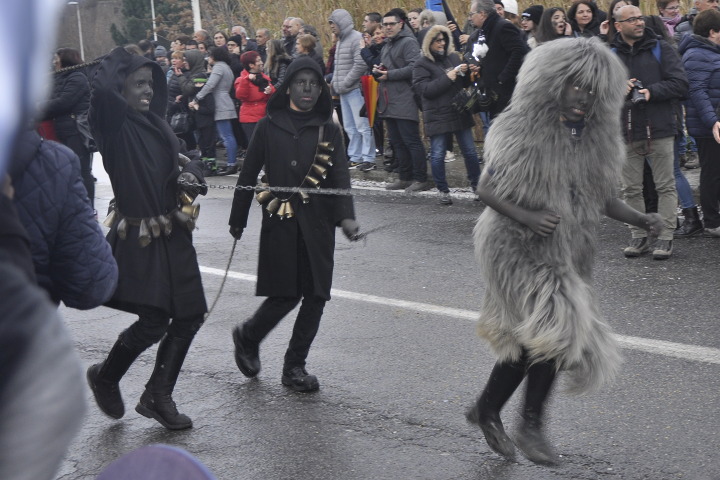 It is then the moment of the masks from Ottana; the Boes parade wearing sheep’s wool and a colored mask with the appearance of an ox, symbol of prosperity; the Merdules walk, in sheepskin with a black mask with human features. The Merdules have the role of guardians and the task of taming the Boes.
The group is closed by the figure of Sa Filonzana, a deformed old woman intent on spinning wool. Sa Filonzana is accompanied by a Merdule that plays the zirodde: a particular musical instrument like a drum that produces a lugubrious sound. 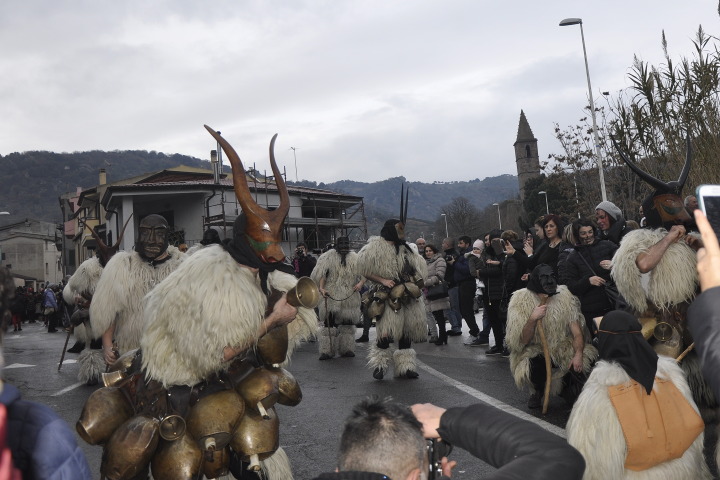 Then the Samugheo Mamutzones come, covered by animal skins, with heavy bells and hats with bovine horns. Their path seems almost like a rhythmic dance, during which the bells resound. There are also two other figures: s’Urtzu (representing the animal spirit) wearing a goat’s skin and s’Omadore, a tamer dressed in black.
Ad un certo punto, tutti i figuranti danzano in cerchio intorno ai loro copricapi poggiati per terra. It is then the moment of entry of the typical Macomer mask: Donna Zenobia. We see advancing a group of figures dressed in black, with wooden masks, representing ugly but benevolent women. Mamuthones and Issohadores of Mamoiada

The masks of Mamoiada close the procession. The Mamuthones proceed covered with animal skins and heavy bells and wear a black wooden mask; with sudden shoulder shots they ring all the bells. They are accompanied by the Issohadores, characterized by a red waistcoat.
The Issohadores suddenly throw the snare they carry, trying to capture girls and young women; being caught is a sign of good omen. The closing of the parade

Once passed all the masks, we cross the alleys of the center of Orani and we are able to attend another passage of the masks in the final part of the route. Finally we go to the town hall square where the celebrations will continue until the evening. Unfortunately it is starting to rain, but this does not discourage all the people who have chosen to be here. 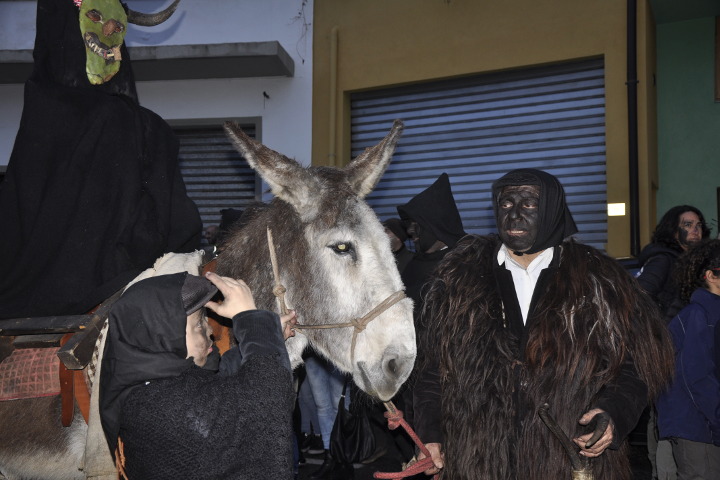 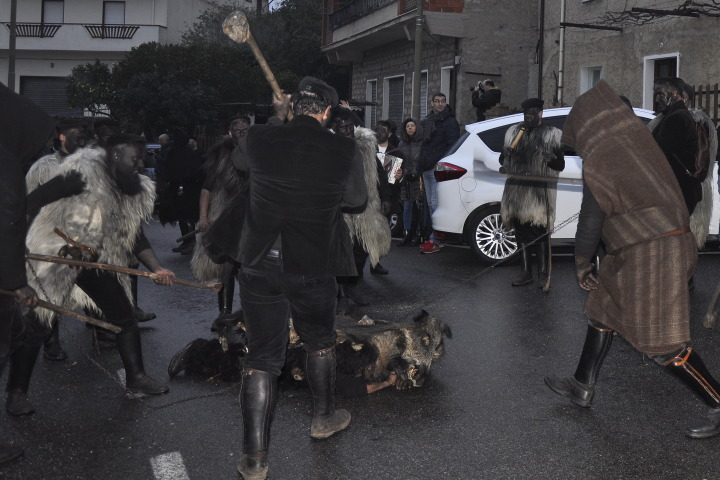 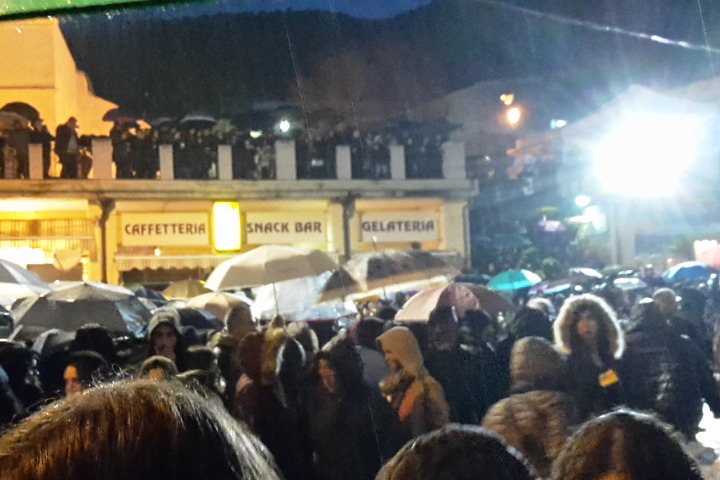