This year we decide to assist, on Sunday, at the Sartiglia, characteristic and striking manifestation of the Carnival in Sardinia.
It takes place in the town of Oristano in two days; during the Sunday before Carnival is dedicated to the guild (or corporation) of the farmers, while the Tuesday (Shrove Tuesday) the event is open to the guild of carpenters. 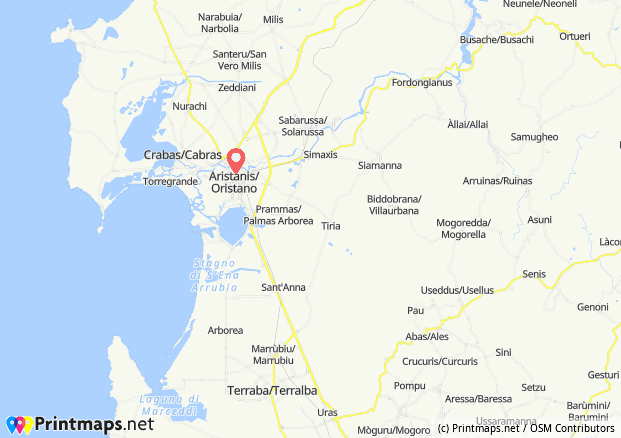 The event of Sa Sartiglia

Whether on Sunday that on Tuesday, the knights of the corporations compete in a spectacular horse race called Sartiglia, the heart of the event, which over the years has given the name to the entire day of celebration in which it takes place. It is a real challenge and not just a historical representation: we see a carousel of medieval origin that has been passed down over the centuries! In the contest, riders must hit a star-shaped ring with their swords, running on a galloping horse. 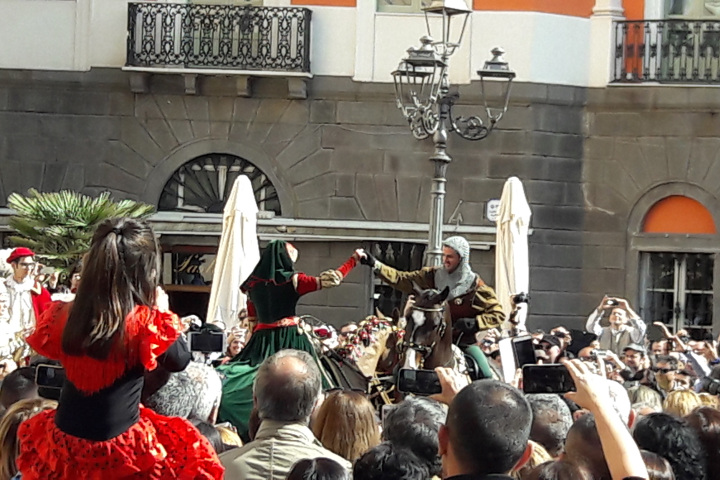 Although the origins of this race are lost in the medieval tradition, the event still preserve the sacredness, the symbols and the show that highlights the skills of riders and horses.
The party is simultaneously a spectacular display of athletic ability and courage and also a particular mix of folklore and popular devotion, that delights locals and tourists. The actual tournament takes place in just over an hour, while the complex and long ceremony occupies an entire day, starting with the blessing, continuing with the dressing of the Knights, the performances and the race, the award ceremony and the take off of the protagonists.
Gowns and masks differ from those in all the other island shows. The traditional costumes of the typical Carnival of Central Sardinia, ancestral and animalistic, reflecting a peasant’s world, in the Sartiglia give way to sleek and stylish Renaissance-style clothing, rich in gold embroidery and brocade, closer to those of the Venetian eighteenth century than to the other Sardinian masks.

The roles of Eleanor of Arborea and Su Cumponidori

Before the race, Eleanor of Arborea (interpreted every year by a different girl from Oristano), on horseback, blesses the knights, which ranks as patroness of the whole event. She will march, then, along the path in the heart of town that will host the race. All his knights and ladies of the court follow Eleanor, marching at the rhythm of the drummers. 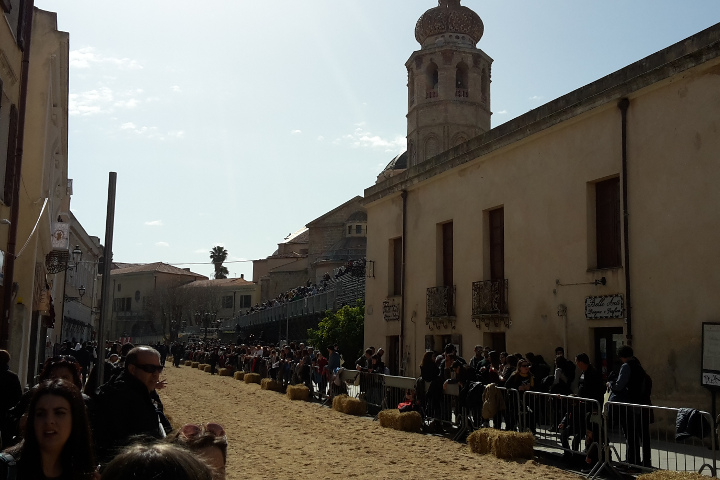 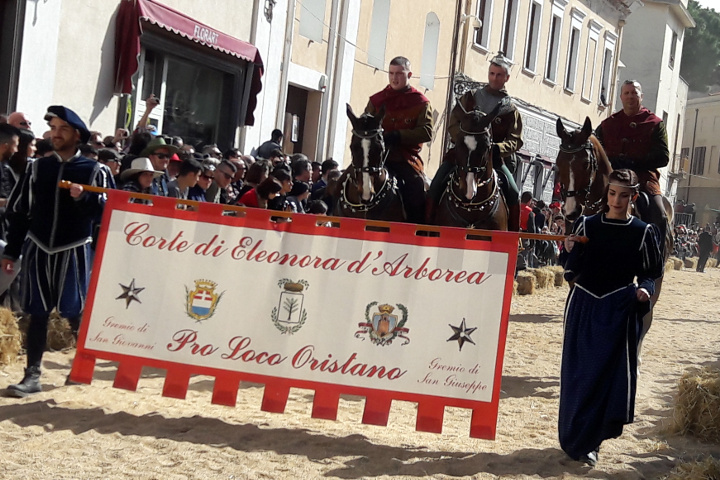 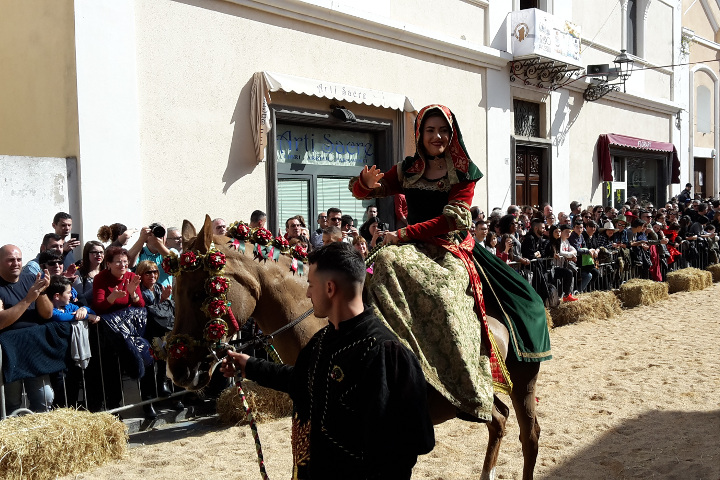 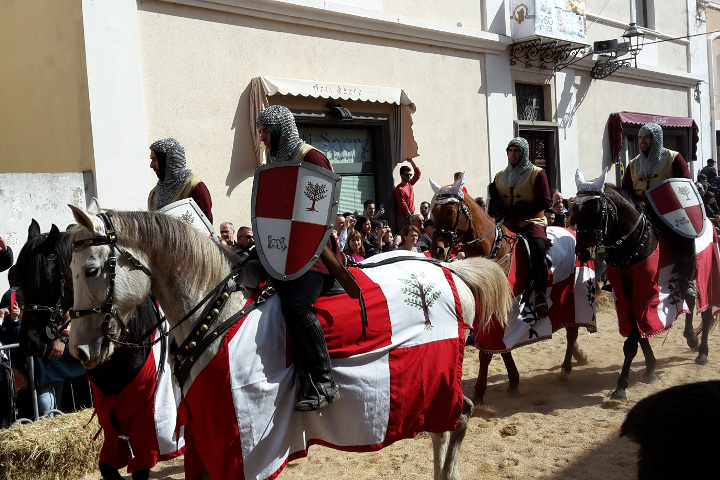 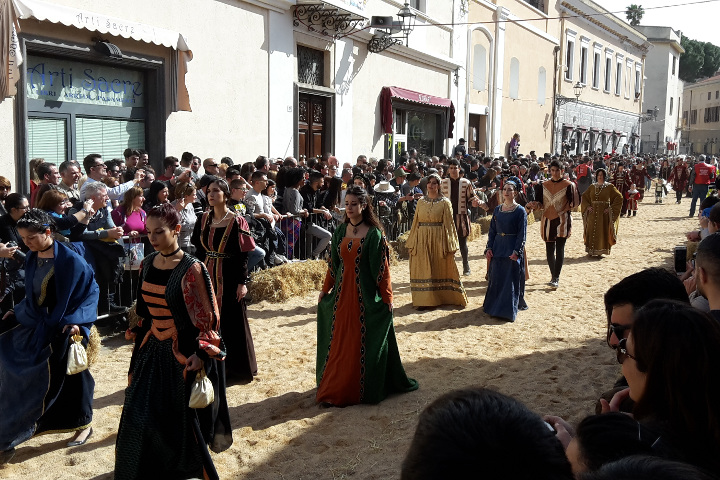 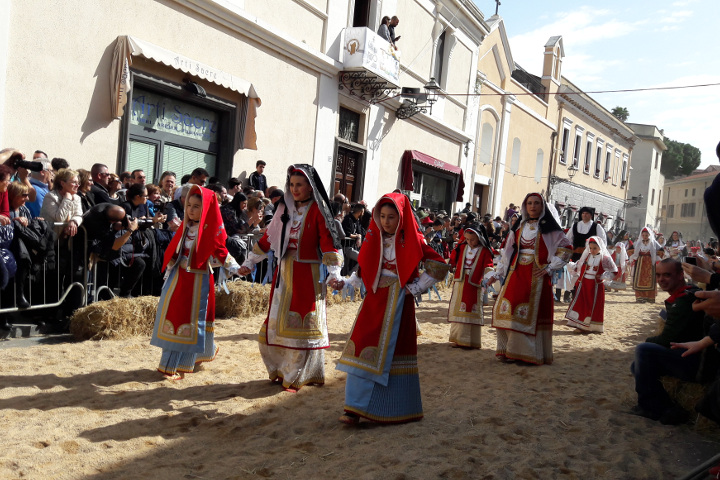 Another key figure in the event is the chief of the knights, known as “Su Componidori“. His preparation with a dressing seems a religious ceremony. He always wear a neutral mask and colorful clothing.
Before the race, Su Componidori launches his blessing into over the crowd, with a scepter composed of intertwined flowers; the traditional name of this instrument is “Sa pippia de maju”.
Su Componidori himself will be the first to try the Sartiglia. He will start on the galloping horse, trying to pierce with a sword the small metal star hanging in the middle of the track.
Afterwards, it will be the turn of the other riders; also other partecipants have their face hidden by a neutral masks, and wear colorful ribbons and gold embroidery. 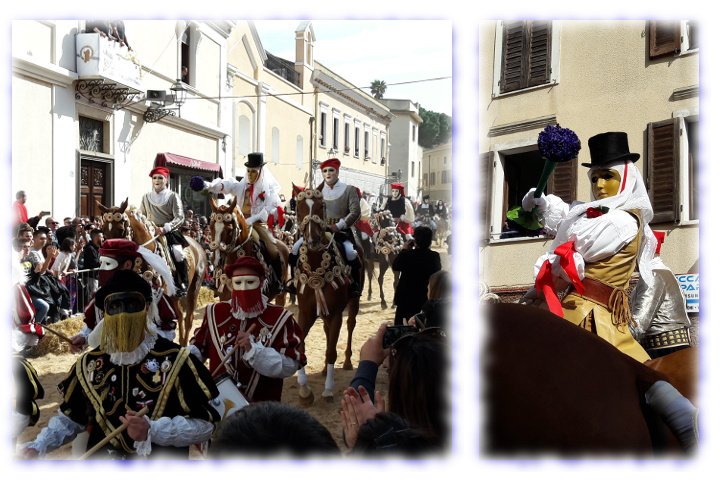 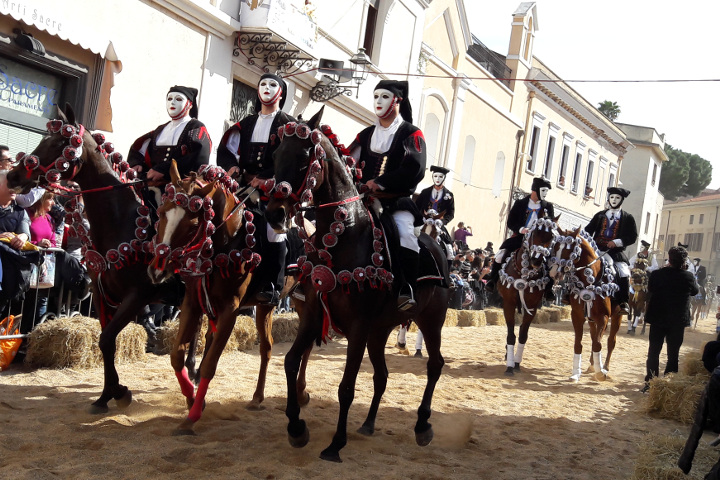 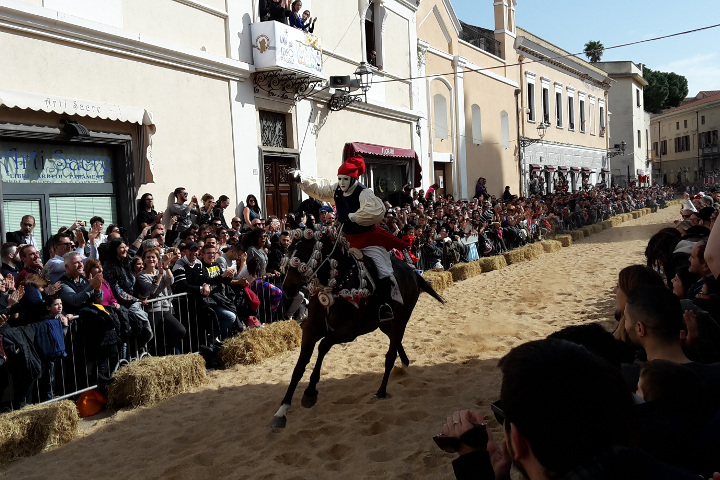 We are lucky to attend the event in a beautiful sunny Sunday; mild temperatures attract numerous curious tourists, allowing the riders to compete in top condition. Furthermore good weather helps the preparation of masks and costumes.
Probably, in this edition we got to watch the longest parades and complete of recent years!

In addition to the race, in the afternoon we are witnessing at the spectacular pariglie. They are acrobatic gallop races where many riders perform, always wearing the traditional costumes and the usual white masks.
Finally, in the last parade all the participants accompany su Componidori at the headquarters of the Guild for his undressing. Without mask, this knight will receive greetings and congratulations of the public. 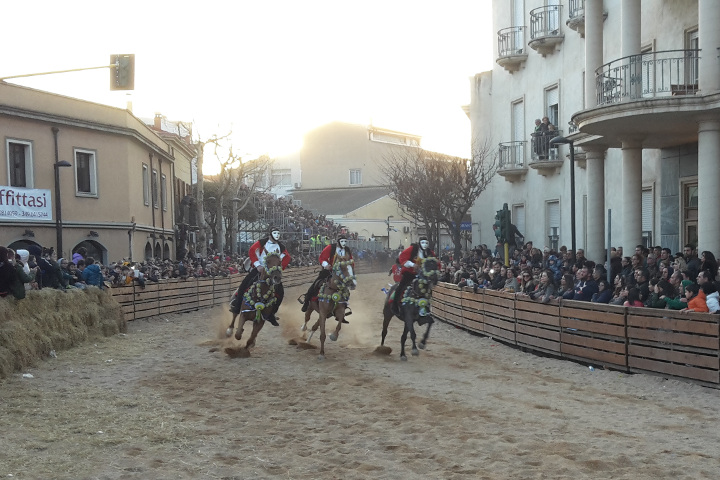 Our day in Oristano ends late, through streets full of tourists, masked children and locals in traditional costumes; also many riders still together with their horses, finally relaxed after the tension of the races.