This post is a small guide about the beaches in the area of Alghero, charming town in the northwestern Sardinia.
Alghero is a beautiful city, which offers many attractions to tourists. The center is very interesting for the historical point of view, with the medieval ramparts that surround the oldest buildings and some churches to see. There are also many restaurants, pubs and discos.
The town is not far from the airport of Fertilia-Riviera del Corallo and from the port of Porto Torres. 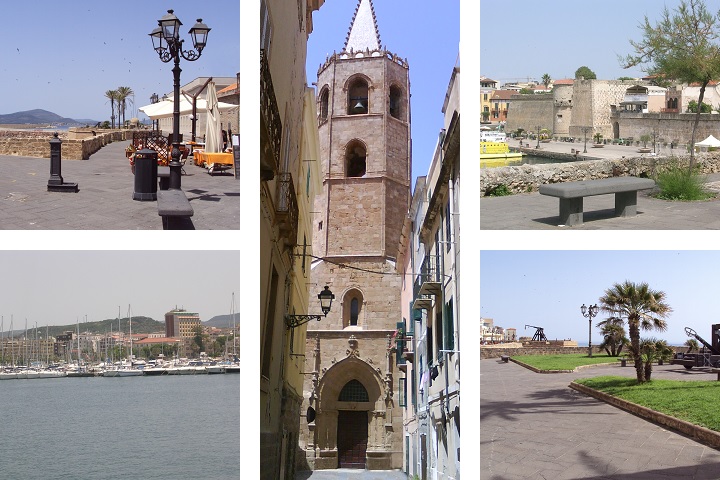 As we have seen in other articles, in this area you can make interesting excursions to archaeological sites or boat trips… But now let’s go to discover the beaches! 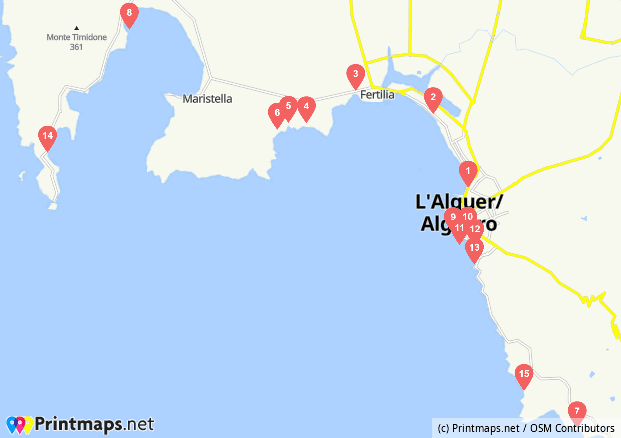 The Lido di San Giovanni is the city beach of Alghero, along the northern part of the town.
It is a long sandy expanse, with a seabed of medium-low depth.
One of the peculiarities of all the beaches of Alghero is the temperature of the water, which is generally colder than in other places in Sardinia, due to the currents coming from the open sea that touch the west coast. Another common element is the presence of abundant brownish algae (posidonia) deposited in voluminous clusters, in some places on the shoreline. The name Alghero derives in fact from the consistent presence of algae in this stretch of sea.
The beach is easily accessible from the town, although in summer there may be some difficulty for parking (the nearest places are subject to charges). There are also many services, equipped areas near the sea, bars and restaurants not so far.
The pedestrian paths under the palm trees allow pleasant walks along the coast. Overall, you can enjoy beautiful views of the ramparts that surround the old town and, in the distance, on the bay of Alghero with the high cliffs of Capo Caccia. 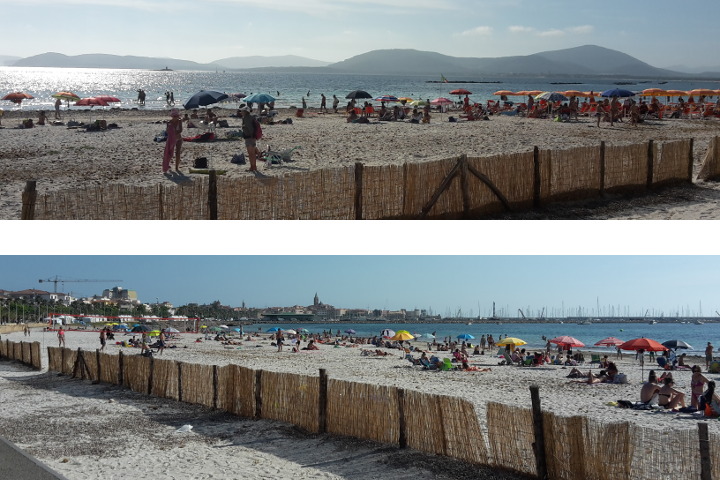 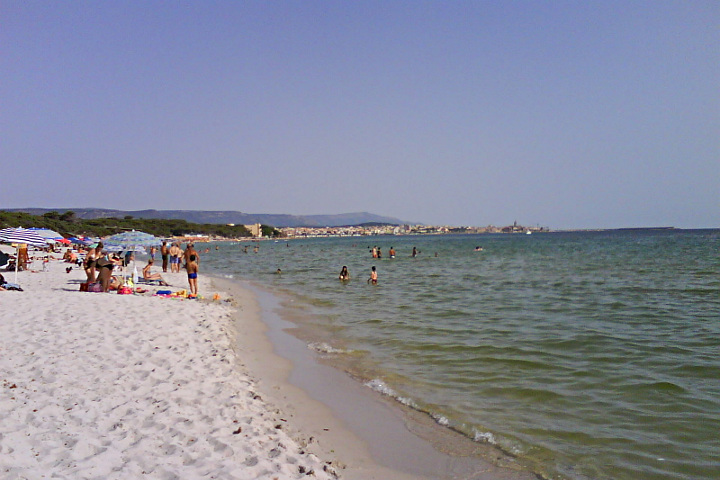 Maria Pia Beach it consists of a long stretch of white sand, which extends between Alghero and Fertilia. The seabed is low and the water generally limpid, but sometimes with posidonia carried by the currents. The natural scenery is pleasant: the beach is bordered by dunes, Mediterranean scrub and pine forests. Some parts of the beach are equipped and offer restaurant services. 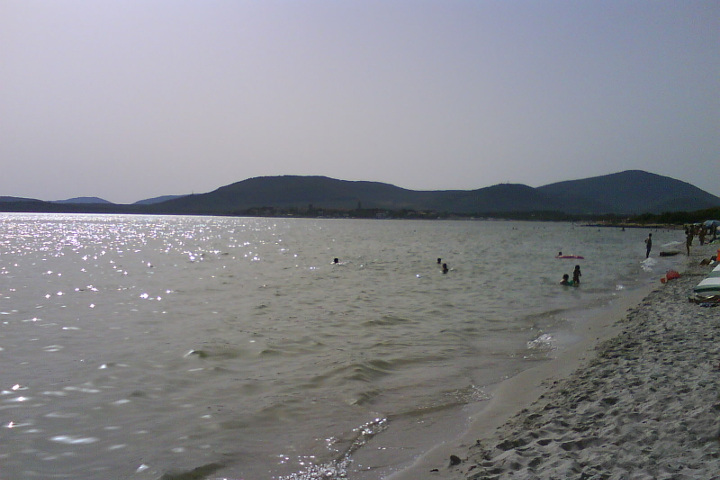 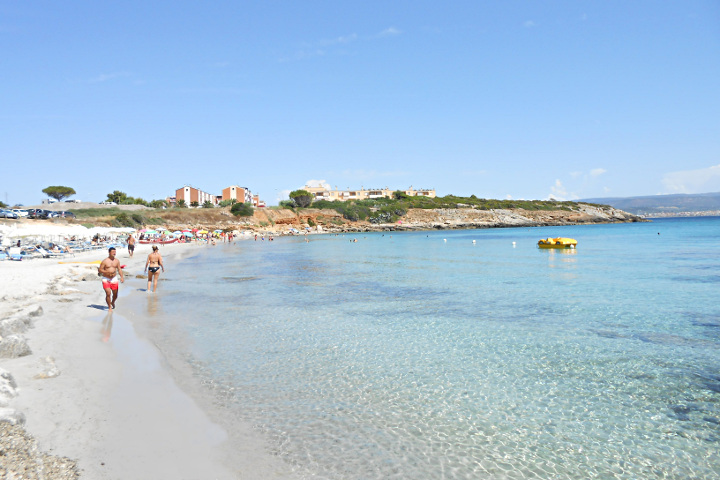 Near Fertilia there is a very characteristic small beach: Punta Negra. The sand is white and fine, the seabed is shallow. The location in the north of Alghero bay is more rarely reached by the posidonia banks, compared to the stretch of coast closest the city. A part of the beach is equipped and reserved for the hotel Punta Negra.
The environment is very impressive: we are in the middle of a small cove; the mixed presence of sand and rocks in the seabed creates charming shades and colors in the the sea. 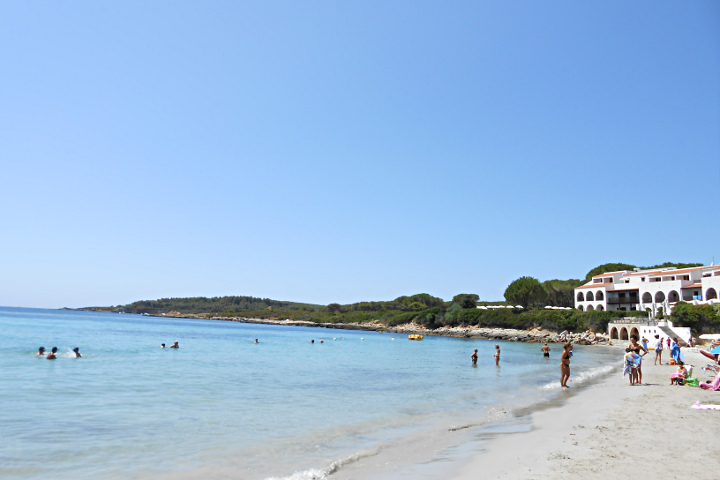 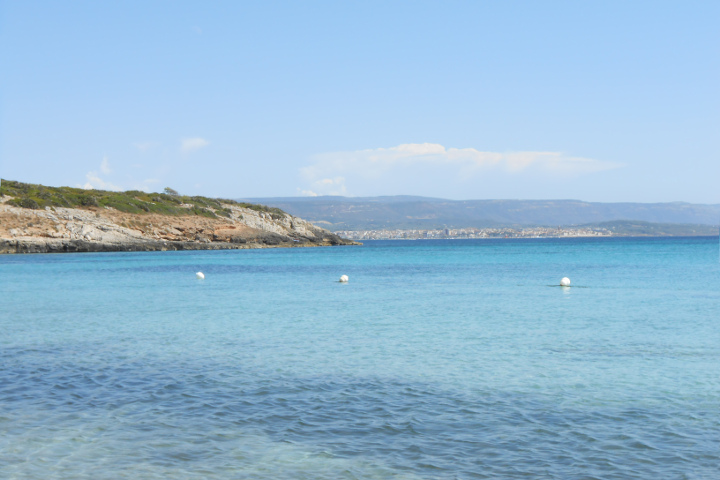 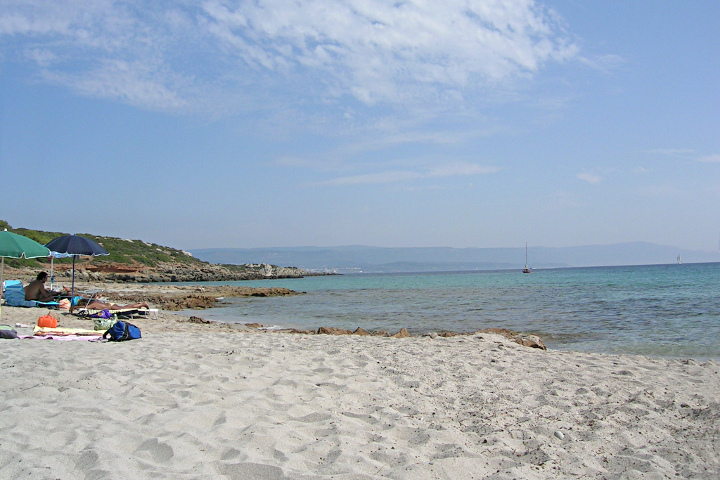 Le Bombarde Beach is one of the best known of northern Sardinia and, for this reason, it is very crowded in the summer.
It is a stretch of white and thin sand overlooking a small bay, with a very clear waters and a shallow seabed. The landscape all around is very green, thanks to the presence of the Mediterranean scrub and the beautiful pine forest of Le Bombarde. This place, since 1999, is part of the protected natural area of Porto Conte.
This place has many services: a part of the beach is equipped and nearby there are bars, restaurants and hotels; there is also a large paid parking.
In the area you can take pleasant walks, with trails in the vegetation to discover small coves. 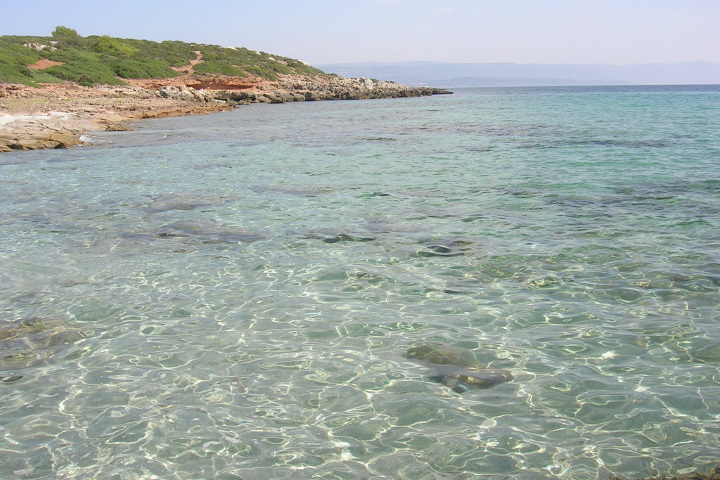 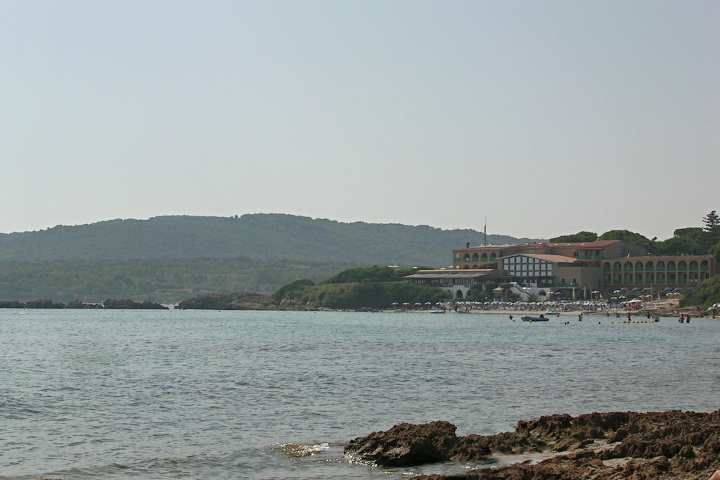 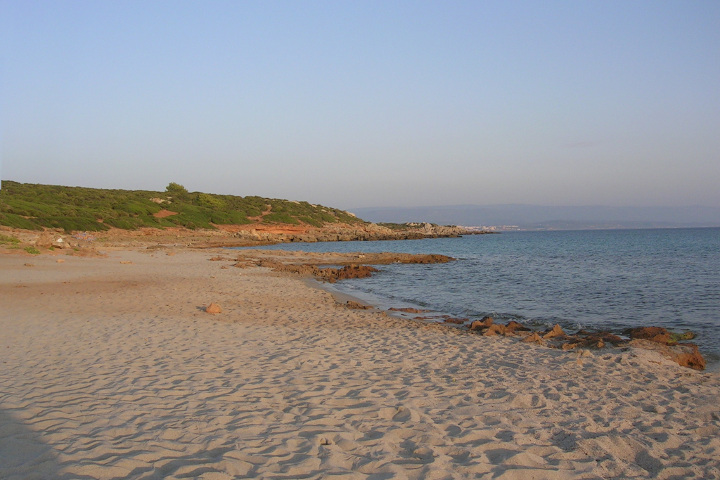 Cala dei Pini is the largest of three beautiful coves, between the beaches of Le Bombarde and Lazzaretto. Compared to these two major beaches, the coves have a more wild appearance, surrounded by cliffs and Mediterranean vegetation. The sandy area is small and, especially in the summer months, it is very crowded; the seabed is partially rocky.
Cala dei Pini can be reached by a short footpath that descending from the road, near the Hotel dei Pini; the path continues up to the nearby Lazzaretto beach. 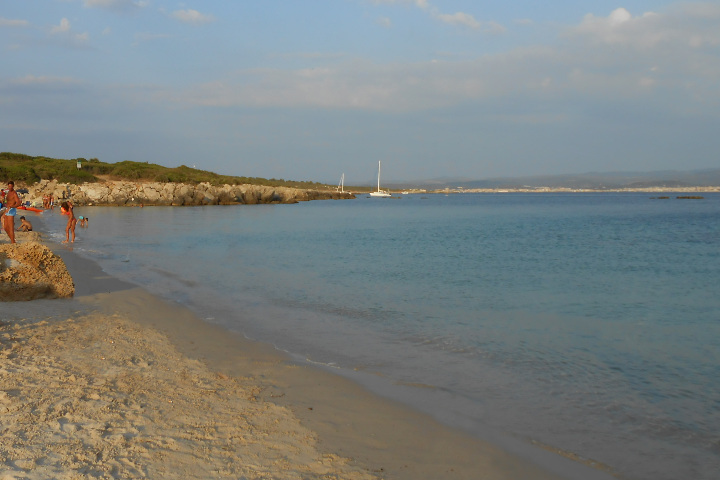 The Lazzaretto Beach is similar to Le Bombarde, under many aspects; the light sand, the shallow waters, the cold and clear sea and the surrounding vegetation are common characteristics. Compared to Le Bombarde, the beach is narrower. Also here there are refreshment points and a paid parking area.
If you want to explore the area, you can go west along some paths that lead to more secluded coves and the nearby Lazzaretto tower. This building, built in the seventeenth century, is not the only historical point of interest in the area: less than a kilometer away, you can visit the Nuraghic complex of Palmavera. 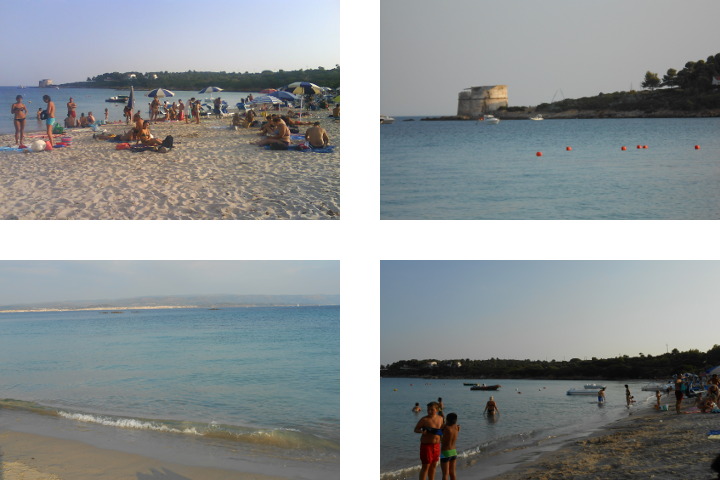 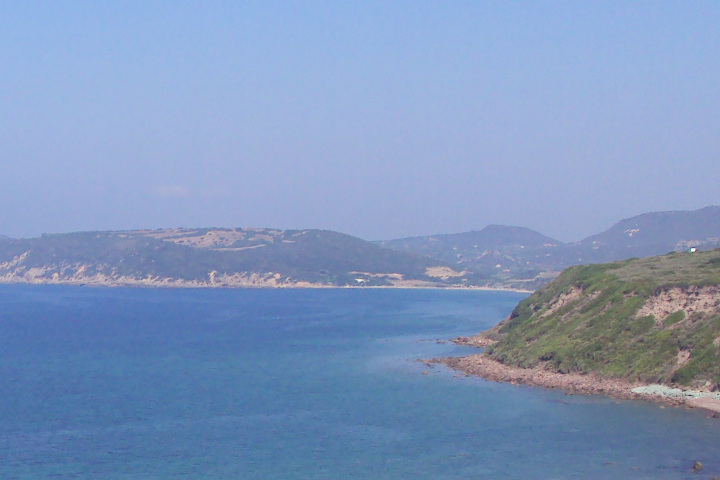 The Beach of La Speranza is located south of Alghero; you can reach it by following the road for Bosa for 8 km. The coast in this stretch is quite high; here there are some coves and inside the widest there is a stretch of sand and pebbles, which is the Beach of La Speranza. The waters are cold and clear, but sometimes there are shoals of algae; the seabed in this location is quite deep. There are bathing facilities, a bar and a restaurant. 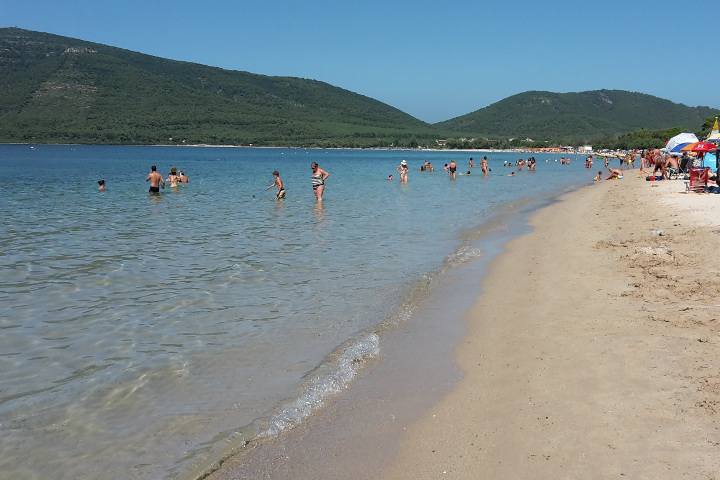 Mugoni Beach is a long sandy expanse located in the bay of Porto Conte, inside the homonymous nature reserve. Given its extension, you can reach the beach in more points, even if the main access is located near a large pay parking. The beach is rather narrow and surrounded by a large pine forest, suitable to find shelter from the summer heat. The seabed is shallow and mostly sandy and make this place particularly suitable for families with children.
Thanks to the bay of Porto Conte, the beach is protected from currents, having almost always calm waters, even on days when the sea is rather rough on the west coast of Sardinia.
There are various services (in the area to the west), including an area equipped with bars.
The view of the surrounding bay is very impressive, both due to the high cliffs of Capo Caccia and the presence of numerous watch towers along the coast. 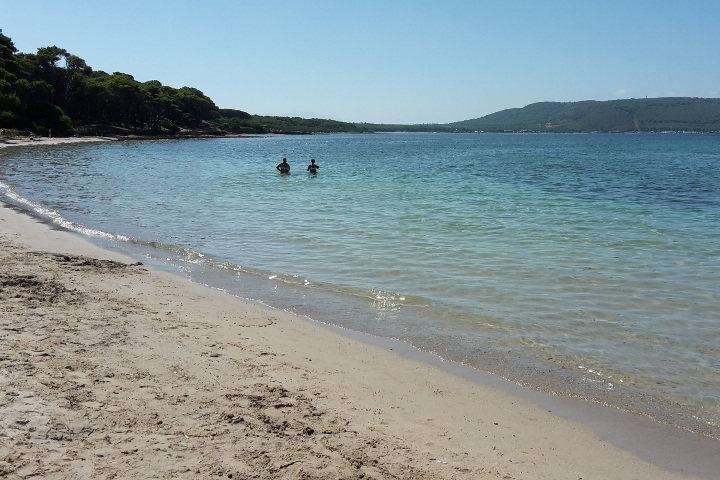 The Lungomare Dante street is located south of the historic center of Alghero. From here it is possible to go down on the rocks, where to relax and to sunbathe; You will find an equipped area at the Il Riservato bar. The access to the water is difficult due to the rocks, but here you can enjoy a pleasant view towards the ramparts of the old city.

The Spiaggetta (little beach) consists of a sandy expanse of modest size, easily accessible, in the small bay north of the Hotel Las Tronas. The seabed is rather low, composed of sand mixed with rocks.

Las Tronas Beach is located south of the Hotel Las Tronas peninsula and it is mostly composed of rocks and pebbles; also the seabed, quite deep, is mainly rocky. You can reach the place near the El Trò restaurant bar.

In the area of Piazza Balaguer you can descend, following some paths in the meadows, to the so-called Scogli Piatti. These are large rocks, suitable for sunbathing. From here it is also possible to go down to the sea, paying attention: both the points of access and the seabed are rocky and the waters are deep. 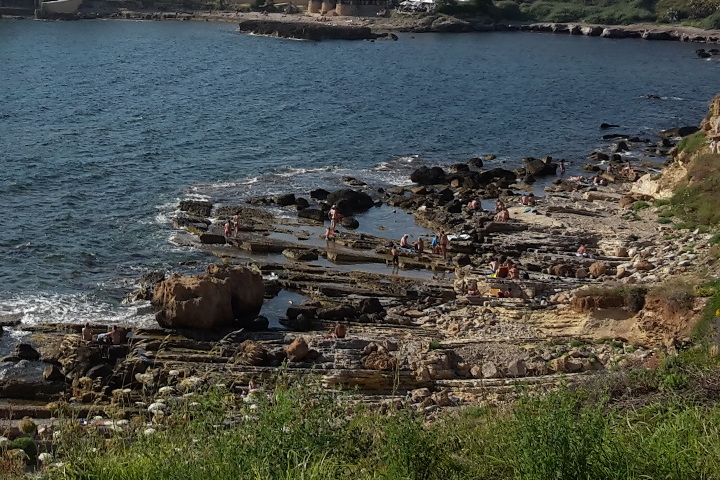 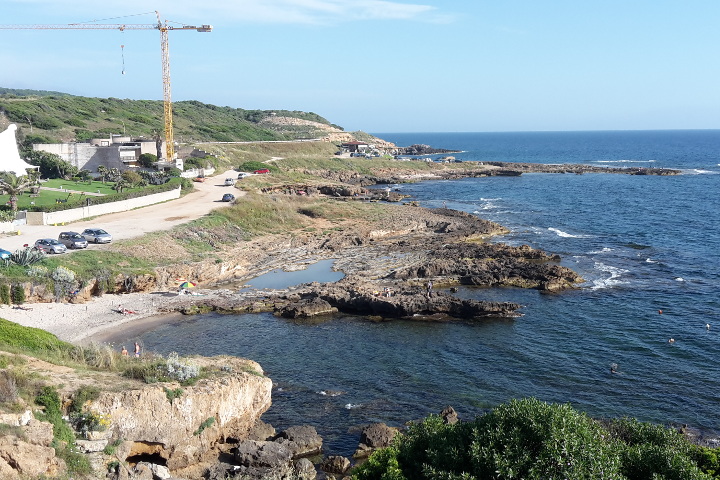 In the southern side of town, south of the hotel Calabona, there are several sandy coves between the rocks; here the seabed is partially sandy, mixed with rocks and pebbles. The largest of these coves is Cala Bona.

Other beaches in the area

14) Cala Dragunara and other coves

Also in the north-west of Alghero, particularly in the Bay of Porto Conte, there are many coves and smaller beaches, very suggestive. One of the most famous, Cala Dragunara, is surrounded by beautiful cliffs; you can go there either through the road toward the promontory of Capo Caccia, or by sea. 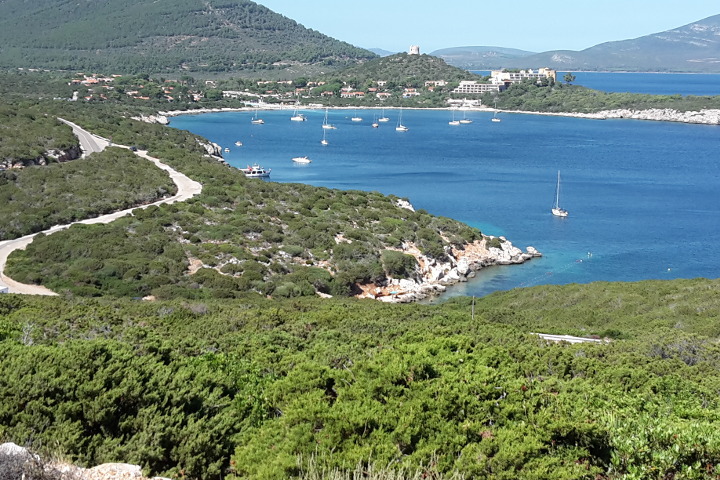 15) Cala Burantino and other coves

To the south of Alghero, the rather high coast has few sandy beaches; by sea, however, you can reach small coves between the rocks, such as Cala Burantino. 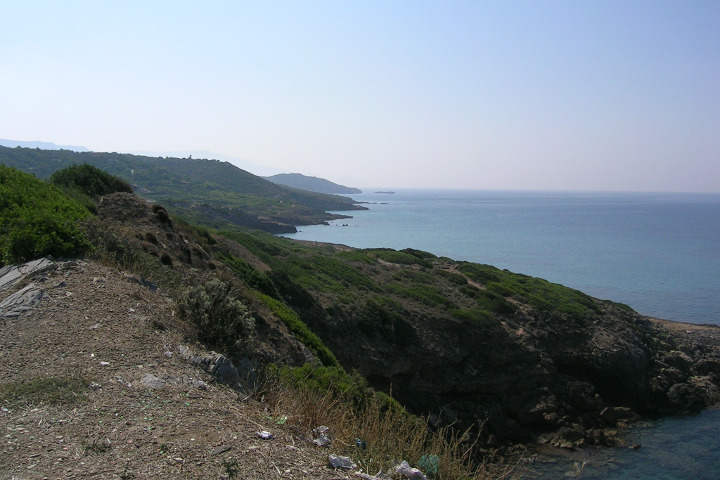 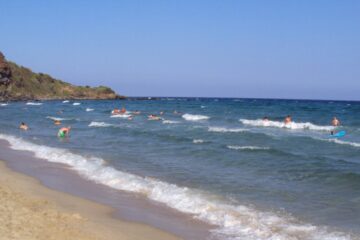