Christmas 2017 is almost upon us, so we have chosen to show you some places that are well suited to traditions… We will see famous places carved into the rock, that reminds us of the caves present in many nativity scenes!
Continue reading and find out where we are!

On the road to Sedini

Our destination is Sedini, a small town in the Anglona hinterland, in northern Sardinia; you can go there from Tergu, Castelsardo or Perfugas in a short time.
We prefer to go from the north, from Castelsardo; so we take the opportunity to make a stop near the village of Multeddu. We pass it going south, along the road 134, for a few hundred meters, until finding an amazing isolated rock: the Elephant Rock. The road runs alongside it and we found parking near this natural monument.
The Elephant Rock is a large block of trachyte that weathering has shaped over time, giving it the appearance of an elephant.
We approach the rock, admiring its elegant lines and the harmony of the surrounding landscape. Only when we reach a few steps, we can discover the secret in the stone of the “Elephant”… There is a cave inside, with features too regular to have been dug only by natural elements.
The cavity was anciently worked by men, who have made several cells of various sizes, turning it into a Domus de Janas! 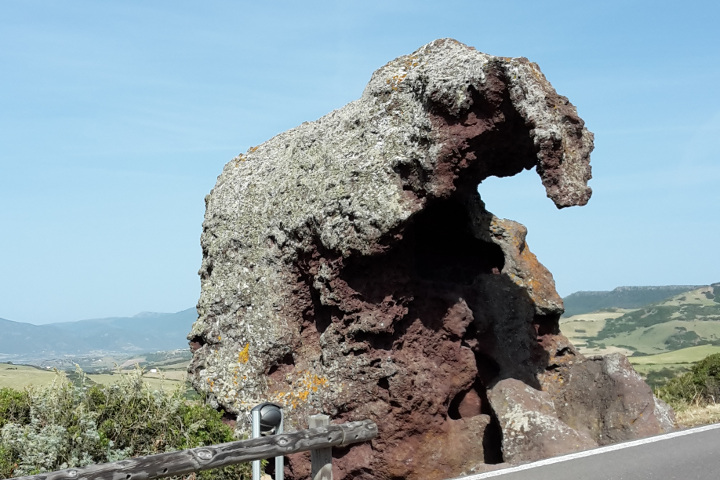 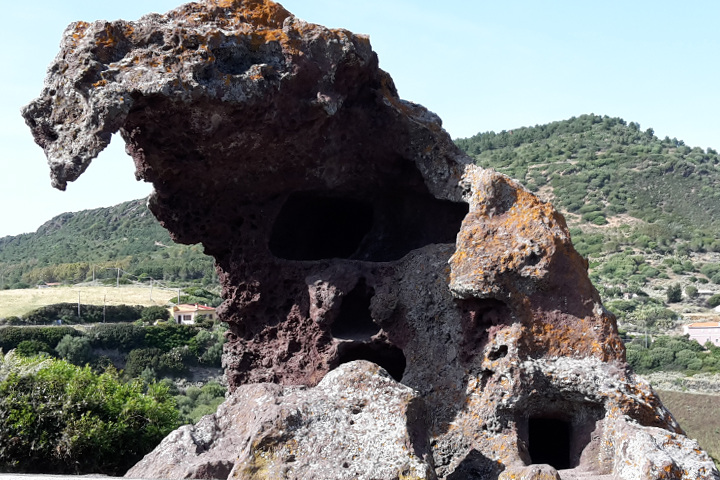 The Domus de Janas or Case delle Fate are cavities carved into the rock; they were created in the pre-Nuraghic era (over 4000 years ago) and used as tombs. These small sepulchral caves are widespread throughout the island; in some places there are also large necropolises, with many Domus. The name Case delle Fate comes from the popular belief that the minuscule rooms in the rock were inhabited by fairies; truly, inside these small sepulchres, the dead were deposited, curled up in a fetal position.
So we leave the Rock with our car.
Unfortunately, the road to the south (once the main to Sedini) is closed, due to the risk of landslides. This route is still visible along the slopes and certainly would allow we to admire a wide panorama; the views range over the plain of Valledoria and also over the sea.

The house in the rock

We then move along the provincial Castelsardo-Santa Teresa for a short distance, until meeting the new road that goes up towards Sedini. The route is quite steep, but in excellent condition; so, in a short time, we reach our destination surrounded by greenery. 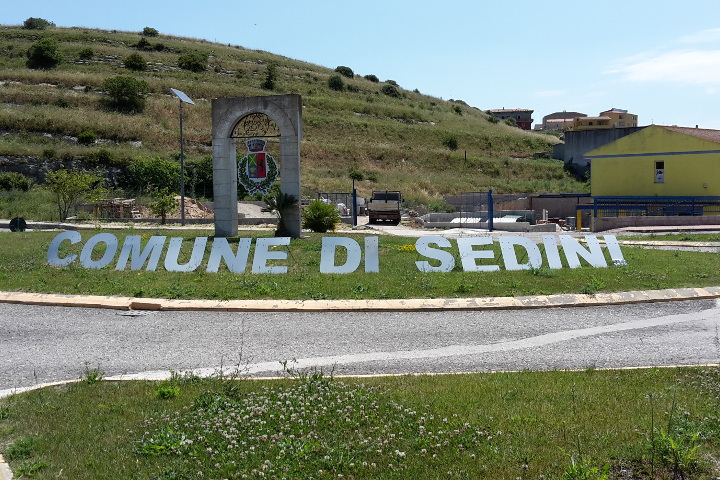 We cross the narrow streets of the center, up to the southern area of the town overlooking a valley. Here we find one of the most characteristic buildings of the whole Sardinia! A house built inside a huge boulder!
Currently the ethnographic museum is located inside, which can be visited both in summer and in winter. Yet this building, unique in its kind, has a very long history…
It is in fact a natural cavity, a sort of small cave in the stone wall that was anciently worked by man to obtain some Domus de Janas (just like in the Elephant Rock); in particular this is the largest Domus in Sardinia and the only one inside a town.
Over the centuries the rooms were enlarged, passages were dug and the cave was closed by walls; in the Middle Ages it was transformed into a complete building. There are internal parts of that period, such as the spiral staircase. The building was then used as a prison and later as a private residence, becoming a small museum in recent times.
Today it preserves numerous relics and objects that testify to customs and traditions of the past, in particular the rural tradition. You can admire many tools that once were part of everyday life… There are pots, sieves, weaving looms, but also furniture and furnishings.

From this particular place, we want to leave you with the best wishes for Merry Christmas and Happy New Year!

We have taken the photos below a couple of years ago, not in winter… With a some lights less, but with a few more flowers. Undoubtedly this is proof that the house can be an interesting destination in all periods of the year! 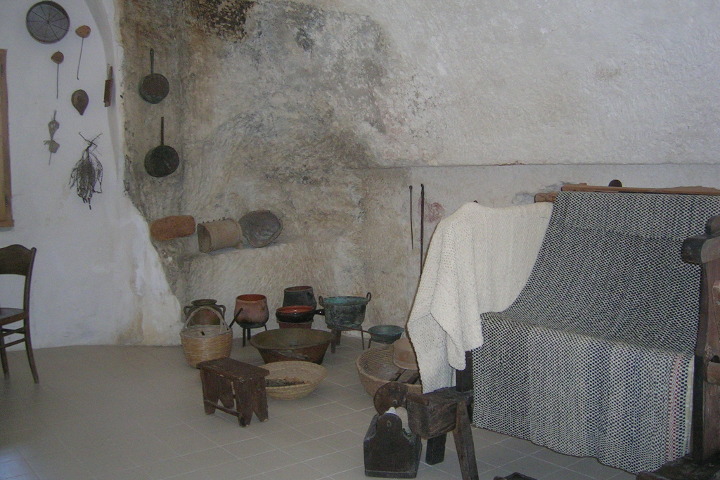 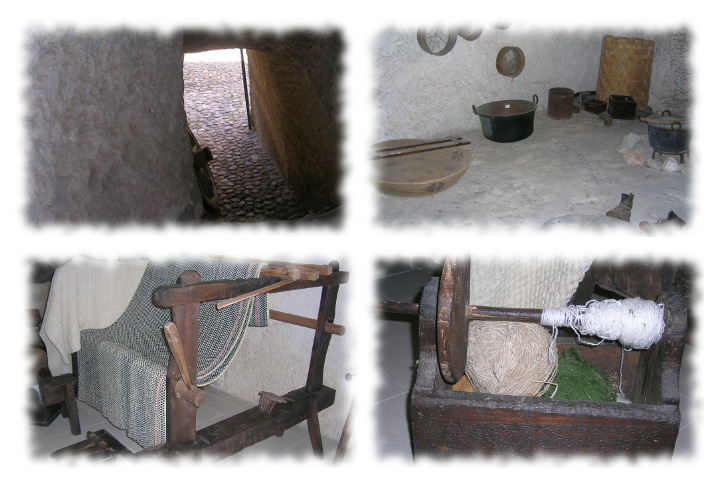 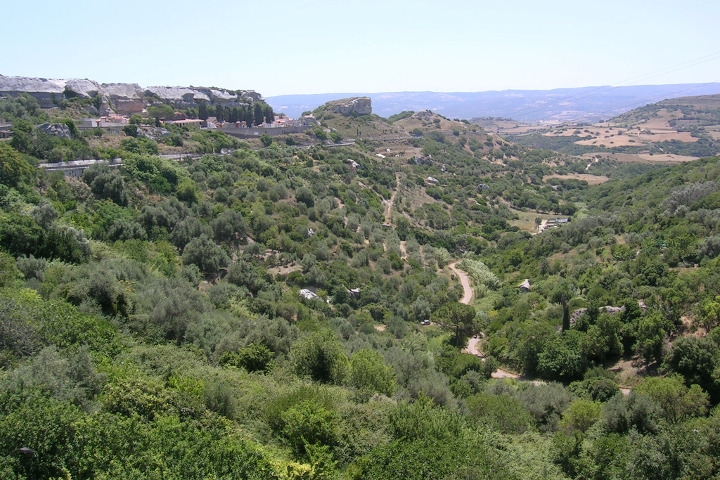 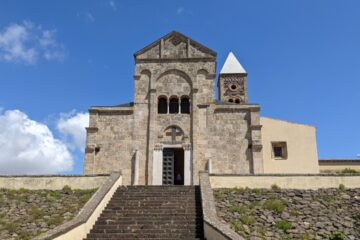 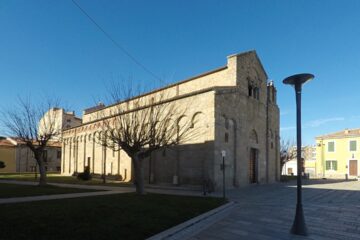 Olbia, a city with many pages of history

Olbia is a small town on the coast in the north-east of Sardinia of great historical importance. The town is located in the middle of a fascinating natural amphitheater: a basin surrounded by hills and Read more…