The Basilica of Santissima Trinità di Saccargia is for many reasons an unforgettable monument.
Here you will find one of the largest churches on the island, an important place of worship and one of the greatest masterpieces of Sardinian Romanesque. 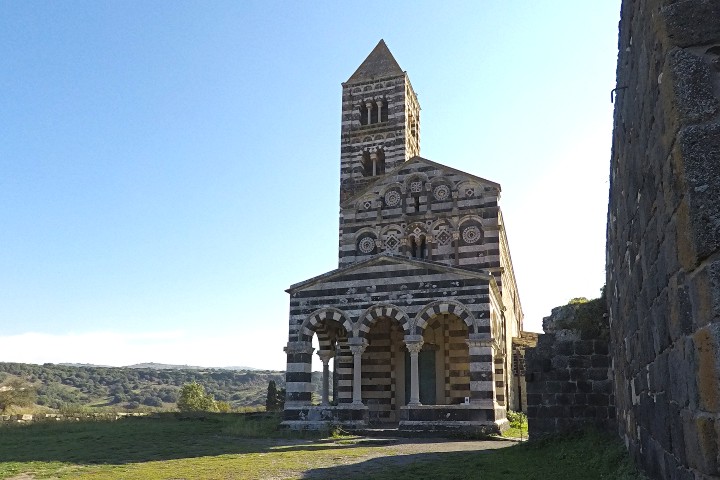 Since we reach the valley where the church stands, we are struck by the landscape. Green hills too high surround a plain, from which stands the imposing bell tower. The alternation of stripes of white stone (limestone) with darker (basalt) characterizes the walls of the sanctuary, giving great harmony to the building surrounded by nature… So we are seeing an almost fairy-tale setting! 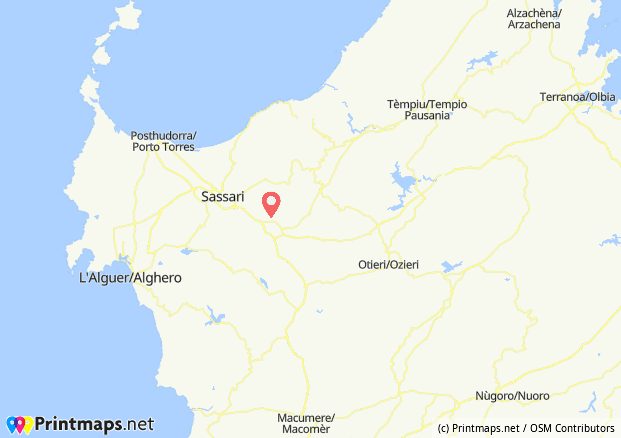 We are in the municipality of Codrongianos, south of Sassari.
As we approach the basilica, we overcome the “postcard effect” and begin to observe the details of the structure. The tall bell tower is flanked by the body of the church, with a Latin cross plan and a single nave. On the façade there are arches and decorations with geometric motifs; a cross vaulted porch protects the main entrance. 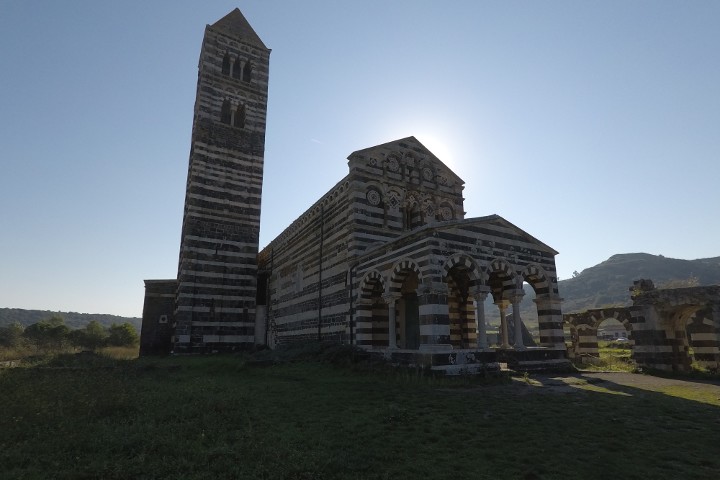 All around, among the meadows, we can see the ruins of the monastery that, in the past, stood close to the basilica.

We walk south of the church, where a large grassy area is surrounded by the remains of walls; in this area stood the ancient cloister. In some photos of the fifties we can see a long colonnade that flanked the southern side of the church; anyway this part has not been preserved until today. 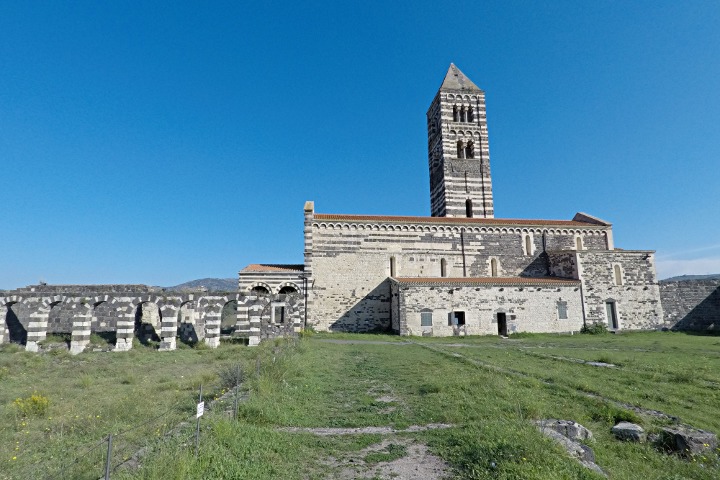 In ancient times, according to a legend, in the place where the sanctuary now stands, a cow knelt in an almost religious attitude; this gesture was interpreted as a recognition of the sacredness of the place. Another myth tells of a hunter who found the cow indicating a writing with the hoof; this was a message according to which, by the will of God, a monastery should have been builded there.
For both legends, the name of “Saccargia” derives from a dialectal distortion of the Logudorese term “s’acca arza”; in particular these words mean “spotted cow”.
It is difficult to say how much is true in these legends… Anyway, in the portico in front of the façade we find a decoration representing a cow.

The first historical records of Saccargia date back to 1116 a.C., the year of consecration of the church. At that time it was built together with the abbey that flanked it. The judge Costantino and his wife Marcusa consecrated the basilica to the Holy Trinity, under the pontificate of Pope Paschal II; Costantino donated the sanctuary, the abbey and the surrounding buildings to the Camaldolese Order.
In the following two centuries the sanctuary was a destination for pilgrimages, festivals and a center of commercial traffic. Undoubtedly it was a place of primary importance until the events of 1323 a.C., when the Aragonese conquest campaign of Sardinia began and the Camaldolese were expelled from the island. A period of abandonment and decay of the sanctuary began and the monastery fell into disrepair.
Only in 1660 a.C. the basilica was restored and used, in later centuries, as a church of the parish of Codrongianos.
Other more recent restoration works took place during the 20th century. 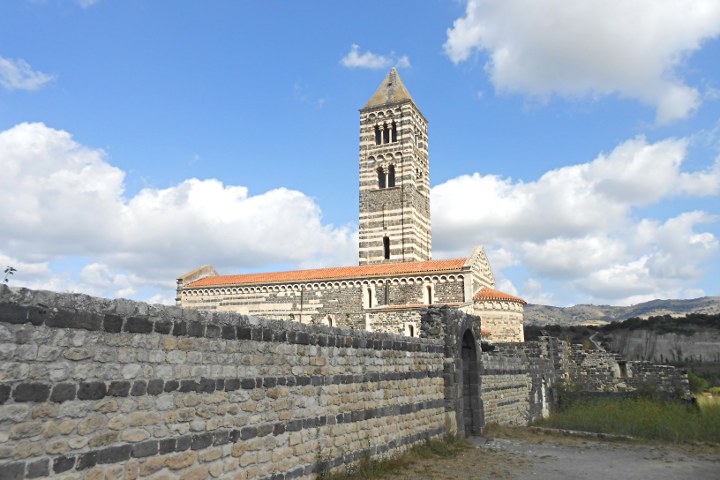 The church is accessible from the side door, on the south side; from here, through a narrow passage we reach the area of the apses.
The interiors of the basilica are quite bare, except for the wonderful fresco that decorates the main apse; it is a work with few equals in Sardinia, which portrays numerous evangelical scenes with a style that in many ways recalls Byzantine art. The author of the work is not known, nor is its exact dating, although it probably dates back to the end of the 12th century.
We can also appreciate other artistic works. In particular there are a beautiful fifteenth-century wooden statue of the Madonna and the minor Retable of Saccargia; this is a panel painting made between the end of the fifteenth century and the beginning of the sixteenth by the Maestro di Castelsardo. 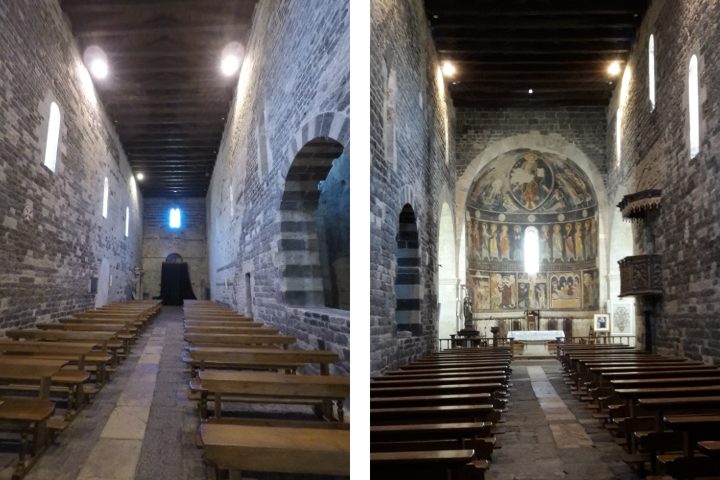 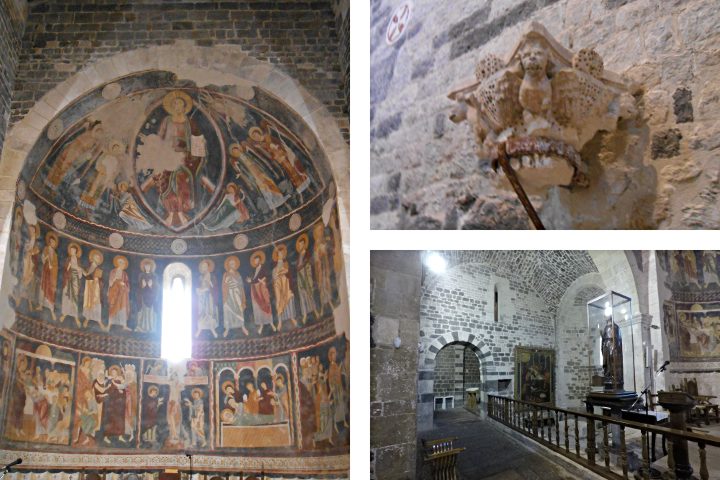